For seniors who’ve been placed on waitlists, the earliest you’re likely to hear any news is around May 8-10.  After the May 1 deadline for admitted applicants to commit, colleges will count their enrollments through the first week of May and get a sense of whether or not they’re likely to fill the class.  If it looks like they’re going to come up short, that’s when they’ll go to the waitlist.  This is why even a good-hearted admissions officer can’t give you much sense of your waitlist status before then.  They might need to take a couple hundred off the list; they might not need to take any.  Some schools will wait until the end of June to review the final senior grades as part of this decision.

So that means two things for waitlisted students: Make absolutely sure you send in your deposit to another college that accepted you by May 1—don’t wait until you hear your waitlist status to commit to another school.  And keep your senior grades up.

Thanks to Arun for his insight on this.

The Choice blog ran an entry this week—College Admissions Advice for ‘Neurotic’ Parents—that generated some good comments from readers.  One in particular I thought was worth sharing.  It's easy to lose sight of the bigger picture during the college admissions process, but Lizzie and her daughter offer a gentle reminder about maintaining perspective.

"My daughter is special needs, which put the college admissions race for my son into perspective. With my daughter, we’re just hoping she’ll be able to hold down a minimum wage job someday and maybe learn to pay her own bills so she won’t have to live in a group home when we’re old. I couldn’t care less whether my son goes to an Ivy or the state university."

The day you decide where you're going to college is a big deal.  No matter which colleges said yes, when you pick the school you'll be spending the next four years attending, that deserves some fanfare.  And it's hard to imagine a family doing a better job than our student, Mike, and his parents do here.

The best part?  One of the schools he eliminated had waitlisted him.  I love it when a student has the collegiate confidence to just say no thanks to a waitlist and pick a school that accepted him outright.

This summer, we’re publishing our book tentatively titled “The Collegewise Way” to teach people how to do what you did—to successfully navigate the college admissions process, find the right schools, and actually have fun doing it.

We’d love to include sidebars that feature you and your experiences, like…

If you’d like to be featured, drop me a line at kevinm@collegewise.com.  Looking forward to hearing from you!

New parents aren’t typically the ones reading this blog.  So if you have a friend, coworker, neighbor or any other acquaintance with a new baby in the house (or one on the way), please pass along this public service announcement about saving for college.

Like so much of financial planning, the best college financing asset a family can have is time.  If you know someone who could avail themselves of that asset, help a new parent out and share the information.

A good tip courtesy of Arun:  Wikipedia’s write-ups about colleges usually list "notable alumni" for each school.  It’s a good reminder that graduates of the least famous of colleges can go on to be CEOs, coaches, politicians, professors, scientists, published authors, actors, inventors, professional athletes, astronauts, entrepreneurs, news anchors and presidents of other colleges.

Here are the colleges and universities where the CEOs of the top 10 Fortune 500 companies for 2011 earned their bachelor’s degrees (compiled from their respective companies’ websites).  The full list of companies is here. 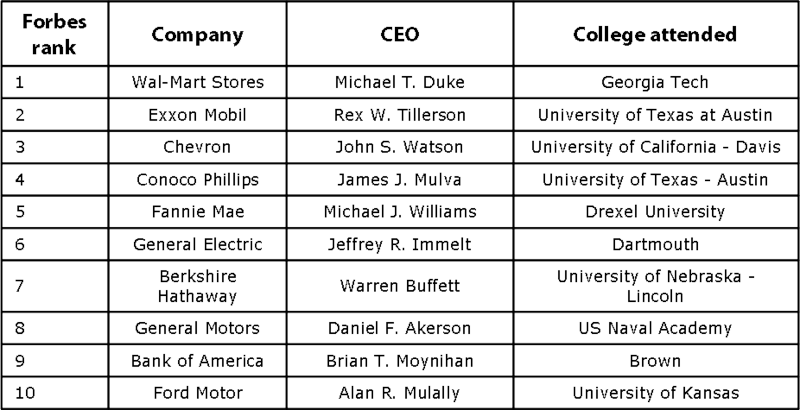 If you’re applying to colleges that require SAT Subject Tests, you’ll obviously need to take the required exams.  But here are five other scenarios where I would recommend you take the relevant subject test.

2. Is your class or teacher particularly difficult, so much so that your grade in the class is lower than the other grades on your transcript?
You might consider taking a subject test to help show how well you know the material.  For example, if you regularly get A’s, but are getting a B in a biology course with a reputation on campus as being particularly challenging, a good score on the biology subject test could demonstrate just how well you really do know biology.

3. Are you home-schooled?
Subject test scores help home-schooled students better demonstrate their mastery of the material.

4. Are you fluent in a foreign language?
The “Language with Listening” subject tests are given the first Saturday in November in French, Spanish, German, Japanese, Korean and Chinese.  You’ll need to be fluent to score well (completing three years of foreign language in high school won’t be enough).

The press runs this story every year.  "Competitive schools got even more competitive."  Somehow, it’s treated as breaking news.  If I charged people to come to a seminar and then spent the entire time teaching them that it’s hard to get into prestigious colleges, they’d ask for their money back.  But like clockwork, here come the annual stories again.

Here's a story worth talking about.  There are only 40 colleges in the country that admit fewer than 20% of their applicants.  There are 1600 colleges that admit more than half.  We all get to make a choice.  We can talk about all the bad news and focus on the fact that when Harvard takes 6 out of every 100, your chances of getting in are close to zero.

Or we can talk about how many great colleges there are out there that will gladly take you just as you are and give you a transformative four-year experience.

I know which story I’d rather read.

After helping more than 3,000 kids get accepted to college, our counselors are pretty good at predicting where our students will and won’t be admitted.  That skill helps us guide families to make balanced college lists where kids can take some educated, focused shots at a few reach schools, yet still have plenty of colleges that are both good fits and good odds of admission.

But every season, a handful of admissions decisions arrive that just make us ask, what the hell happened?

Sometimes it’s a good surprise, a student who takes a wild swing at a college that was a huge reach and ends up accepted, even though the school denied lots of seemingly more qualified students.  And sometimes a top student, one who seems to have done everything right, gets a rejection from one school that admitted a lot of seemingly less qualified applicants.  That’s a frustrating surprise, especially when it’s a school the student really wanted to attend.

After watching so many kids go through this, I still think the majority of colleges’ decisions are fair and consistent.  The more admissions officers I’ve met and had the chance to work with at Collegewise, the more faith I have that applicants are evaluated by smart, compassionate people.  At the most competitive schools, they’ve got to turn away a lot of kids who were qualified, but they do their best to be fair and deliberate.  It’s not a perfect system and there will always be surprises.  But those surprises are the exception.

If you get a good admissions surprise, be thankful and don’t second guess yourself.  Nobody just slips in—you presented something that made the admissions committee vote to admit.  And if you get the bad surprise, just remember that what feels like a terrible injustice today won’t matter at all in six months when you’re loving your life at a college someplace else.  I know it might feel like that’s never going to happen, but you’d have a hard time finding any freshman in a dorm still lamenting a rejection from a college.   You’ll move on, too.