When our counselors go through the Collegewise training program, we read and discuss a number of books about college admissions.  Here are a few of our favorites. 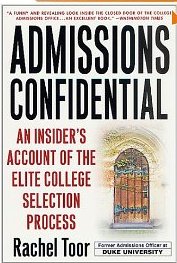 Toor  takes you along with her during her three-year stint as an admissions officer at Duke University.  I include this book in our training because it shows that admissions officers are just regular people, not stuffy educators.  Toor took a job in admissions because she thought it would be more fun than her editing job. She admits to having a soft spot for artsy kids and reveals that she argued most forcefully for those students she felt like she could hang out with.  It's not a book about how to get into Duke; it's more of a revealing account of what it's like to work in a highly selective college's admissions office.

A is for Admission:  The Insider's Guide to Getting Into the Ivy League and Other Top Colleges by Michele A. Hernandez

Michelle Hernandez is not universally loved in the college admissions world (If you'd like to know why, here's an interview on NPR), but I still appreciate that she comes right out and describes exactly how she and her colleagues at Dartmouth actually evaluated students.  It's also refreshing to hear someone else say that a student could scoop ice cream during the summer and still get into a selective college.  Her section on letters of recommendation is especially good.  Though unless you  majored in statistics, you might want to just skip over the section on the "academic  index."  It's complicated and not terribly interesting (to me, at least).

College Uranked: Ending the College Admissions Frenzy, edited by Lloyd Thacker
I love this book’s mission—to help students re-take control of a college admissions process that seems to have spun out of control.  The advice comes in the form of short essays from admissions officers themselves.  Some are better pieces than others, but it's a good reminder of something we've learned after doing this for over 10 years–admissions officers are mostly good people who want to do the right thing by kids even if they can't admit all of them. 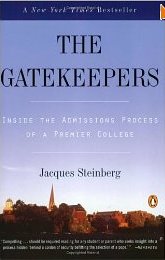 The Gatekeepers: Inside the Admissions Process of a Premiere College by Jacques Steinberg

Steinberg (who now writes the admissions blog "The Choice,") observed the admissions process at Wesleyan University and wove it into what I think is an entertaining read.  You'll learn a lot about admissions, and don't be surprised if you get sucked into the story.  Waiting to find out who gets in is like waiting to find out who the killer is at the end of a taut suspense novel.  And one of the applicants profiled went on to found Unigo.com. 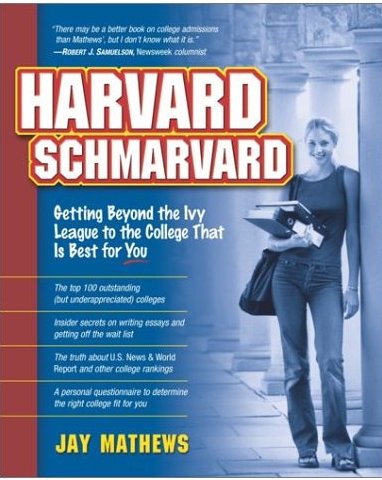 Harvard Schmarvard: Getting Beyond the Ivy League to the College That’s Best for You by Jay Mathews

The title pretty much says it all.  Jay Mathews offers a good dose of perspective and common sense to the process, and even gives readers a list of 100 great colleges worth considering.  I love his honesty about everything from the realities of the waitlist to the search letter scam where kids get warm and inviting letters from selective colleges based on nothing but PSAT scores (which aren't even used during the admissions process).  Jay's also a parent of two kids who've gone on to college and has especially good perspective for moms and dads of the college  bound. 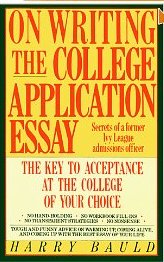 On Writing the College Application Essay by Harry Bauld

It was written nearly twenty years ago, but the chapter about overused essays entitled, "Danger: Sleepy Prose Ahead" is worth the price of the book.  I'll put it this way.  #8 on his list is "Pet Death" of which he says,

"Maudlin descriptions of animal demise, always written by the fluffball.  'As I watched Button's life ebb away, I came to value the important things in the world.'"