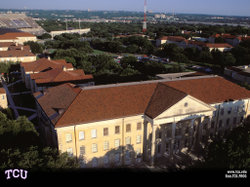 There are some colleges where the mascot is just the poor
sap in a smelly suit. But for others, the mascot is a central part of the
school’s identity. Take the TCU (Texas Christian University) "Horned
Frog," for example.

From the stadium chants of "Go Horned Frogs!" to the "Frog
Family Homecoming" for alumni in October, TCU’s Horned Frog is a part of
their campus culture. Nowhere is this more apparent than at home football
games, a staple of TCU’s student spirit. In fact, all TCU students recently
received a letter from second-year Chancellor Victor J. Boschini welcoming them
back to school and inviting them to the Horned Frogs’ nationally televised
opening home football game against Northwestern. It probably wasn’t hard to
garner support. The Frogs were coming off an 11-win season and a top 25
post-season ranking in 2003.

He signed off his letter with the following: "So be prepared to study like
your future depends on it (it does!), and play safely – for the same reason.
Indeed, that’s what Horned Frogs do!"

With 6,880 undergraduates, TCU offers a smaller student body than Texas giants
like UT Austin and Texas A
& M. The school’s strongest program is its
business major. Within the business program, 18 students each year manage over
two million dollars in assets through the Educational Investment Fund – a
once-in-a-lifetime opportunity for students to invest real money while still in
college. The participants in the Educational Investment Fund do intensive
analysis of stocks and bonds and make all buy and sell decisions.

But even the serious business majors are Frog-aholics. When they log onto the
career center’s website to look for jobs, they do so with the user-name
"Go Frogs." 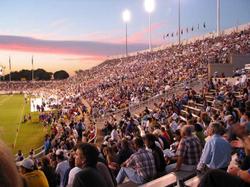 So, why would we spend most of our College Spotlight talking TCU’s Horned
Frogs? We like colleges that provide great experiences as well as great
educations. It’s impossible not to be happy about where you go to college when
you’re painted purple and cheering for your Horned Frog football team. TCU and
its students do college a little differently. Even the college’s application
includes an optional "Freedom of Expression" page on which students
can do anything they wish within the confines of the page.

And in case you were wondering, horned frogs are cold-blooded animals and have
an unusual pineal gland, resembling a "third eye" on the top of the
head, which zoologists believe is part of their system of thermoregulation.
When angered or frightened, horned frogs can squirt a fine, four-foot stream of
blood from their eyes.

You can learn more about TCU, and about their beloved Horned Frog at http://www.tcu.edu.