Overachieving, overscheduled students—here’s a scenario. Imagine your top colleges of choice announced their intention to give special admissions consideration to students who averaged 7-8 hours of sleep every night. Would you need to make changes in your life to maintain that advantage? If so, what would you do?

Would you cut out that sixth activity that just doesn’t mean that much to you?

Would you shut out the distractions while you study so you could really focus and get more done in less time?

Or would you have to entirely rethink the way you’re currently scheduled, maybe by scaling back your APs or your test prep or your activities?

Whatever your answer, maybe you should consider making that change now?

Losing sleep almost never makes us, our health, or our work results any better.

Students, if you were to list your five most successful and fulfilling achievements—a good grade on a test, a raise at your part-time job, a learned skill in something that matters to you—what  would you learn from it? What behaviors led to the success? How can you apply those approaches to other areas of your life?

Successful people get that way in part because they learn from the inevitable failure that comes with repeatedly embracing challenges where they might not succeed. But they also know that success comes with its own valuable lessons.

This isn’t about pushing yourself to get better at everything all the time. It’s important to savor your successes and not to instinctively demand that you do even more all the time.

But the thrill that comes along with success is motivational fuel. And recycling the behaviors that lead to that success makes your fuel more efficient.

If you have a student, colleague, or friend who’s always late and leaves you waiting, here’s a technique that may change their behavior. The day before your next scheduled meeting together, just ask, “Will you be late tomorrow?”

Most people can’t bring themselves to answer yes to that question. But just considering the question at all makes them examine what they’re doing and consider what kind of behavior they want to model. Psychologists call this “self-persuasion,” and it’s surprisingly effective.

We’re more likely to persuade ourselves to change than we are to be persuaded.

At the end of every week, month, semester—your choice—give yourself an honest grade based on these metrics.

The 2008 film Forgetting Sarah Marshall includes a memorable cameo by Paul Rudd as Kunu, a zany surf instructor who repeatedly dishes out just one instruction: “Do less.”

Wacky as the character may have been, there’s a lot of evidence that doing less is the key to success. It doesn’t work if you do nothing, but if you cut out the extraneous stuff and leave yourself with less to do, you focus your efforts on the work, people, and impact that matter most.

Here are a few past posts of mine, here, here, and here, that link to the research and writing on this topic.

Adam Grant’s recent advice shared on his Twitter feed really resonated with me for a number of reasons.

My number came up for jury duty this week. Anyone who’s gotten this particular call to serve knows that it begins with shuffling everyone scheduled to report that day into one large room for an overview of what to expect. Greg, our clerk, has the unenviable job of beginning his day by facing a room of more than a hundred people, many of whom are there by obligation alone, and explaining the procedures we’ll be following. He was cheerful but also particularly effective in that he changed the room in the first sixty seconds with his explanation of jury reimbursement.

“You’ll be compensated ten dollars a day, which I know is more than most of you paid to park here this morning. That figure isn’t something we’re proud of. In fact, I’m pretty sure it hasn’t changed since the Eisenhower administration.”

It came off as more empathetic than comedic, but it sure did get a laugh from a tough crowd. And with just one sentence, he won the room over in the most subtle but effective of ways—by showing us that he understood what we were feeling and experiencing.

Greg likely gives some version of that 20-minute overview every day. It would be so easy to just plod through it, to resign himself to the idea that nobody in the room particularly cared what he had to say and that there really was no point in doing more than the bare minimum.

But he’s clearly engaged in his job. He embraces the opportunity to change the posture of everyone in that room, not by following instructions or reading a script, but by bringing some emotional labor to the task at hand. Greg may not have the power to change the system, but he’s got the power to change the day for a lot of people. I’m guessing what we witnessed was just a glimpse of the magic he brings to work.

One of the best ways to stand out is to make change. And you don’t need a title or even a room full of people to do it.

A student who patiently tutors someone from a D to a B in algebra is changing that student’s academic progress. A student who finds ways to make the gym work as a senior prom location instead of bemoaning the reality that a different venue fell through is changing people’s moods. A student who treats every customer who orders a burger when she’s behind the counter like they’ve just made her day by showing up is changing people all day. None of these opportunities require special training or scarce opportunities. They’re available to you in ways that you’re already spending your time every day.

There’s a difference between executing and engaging, between just doing what you’re told and creating an interaction that’s bigger than the work. Not everyone can do what Greg did in front of a crowd. But everyone can do for someone or something what he did for our jury room.

Imagine what would happen if you made a point to consciously create change in whatever you’re doing. Sure, you’d make things better for a lot of people around you. But it’s hard to see how becoming a change maker wouldn’t also change you–and your college admissions chances.

Nobody can churn out great work without taking an occasional breather. Dan Pink, author of When: The Scientific Secrets of Perfect Timing, has read the research and distilled the science into his latest short video, “These are the 5 ways to make your breaks more replenishing.”

And here are a few past posts preaching the powers of the well-timed and well-executed break, one from study skills author Cal Newport, the other from Brad Stulberg, who wrote a book about achieving peak performance.

This week in Russia, Japan suffered a heartbreaking loss to Belgium in soccer’s World Cup. Up 2-0 in the first half, Japan gave up two goals before surrendering a heartbreaking third as time ran out, sending the Belgians to the quarterfinals and ending Japan’s World Cup run.

Before departing, the Japanese players cleaned their locker room to a state so spotless it looked like you could eat lunch off the floor. They also left a note in the middle of the room that said only “thank you,” written in Russian.

But it wasn’t just Japan’s players who cleaned up when they didn’t have to. As they have done throughout the tournament, Japan’s supporters stayed behind to pick up trash in the stadium, this time with many in tears over their team’s defeat. 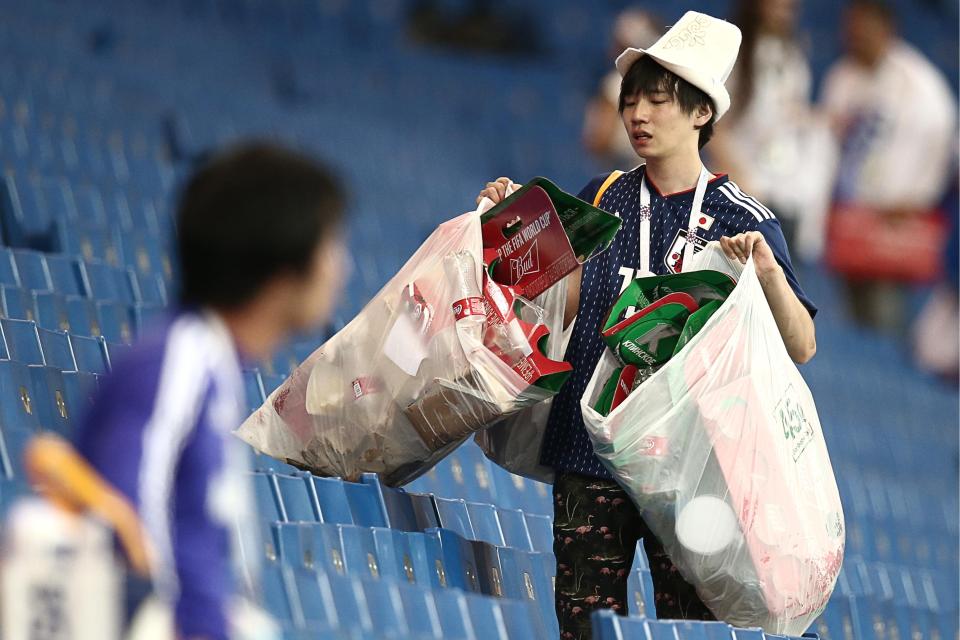 If I were organizing the next World Cup, I’d invite the Japanese even if they didn’t officially qualify. They make the tournament better for everyone, on the field, in the locker room, and in the stands.

It’s easy to do the right thing when things are going well. But if you really want people to take notice, bring your best self when people least expect it, when things have not gone your way, when others would let their disappointment, frustration, or anger get the better of them.

Dr. Heidi Grant is a social psychologist and the author of Reinforcements: How to Get People to Help You. According to the advice she shares in this article, many of us are asking for help in the wrong way—apologizing profusely, using disclaimers like, “I’m not the kind of person who usually asks for help,” portraying the help you need as a tiny, insignificant favor, or reminding people that they owe you.

Here are a few past posts of mine for some additional guidance, one on how to put you and the benefactor on the same team, and two on asking teachers for help—here’s how to do it, and here’s how not to do it.