I’ve written often that the surest way to learn any new material is to teach it back to an imaginary audience. The act of explaining something clearly and cogently activates a different part of your brain and is a lot more effective than passively reviewing or memorizing. Here’s more evidence–a study showing that self-explanation turns out to be more effective than teacher explanation, note-taking, and several other learning techniques.

From Challenge Success’s regular newsletter, which arrived in my inbox this week:

“Research from the Centers for Disease Control and Prevention (CDC) shows that not getting enough sleep is associated with certain health risks and that more than ⅔ of U.S. high school students report less than 8 hours of sleep during school nights. When teens consistently get the right amount of sleep, they feel and function better. A lack of adequate sleep is associated with increased risk of physical illnesses, such as obesity and diabetes, injury-related risk behaviors (e.g. risky driving or not wearing a helmet), poor mental health, attention and behavior problems, and poor academic performance.”

If you’ve made any resolutions in the vein of getting more done in 2019, don’t skip what could be the world’s best productivity hack: saying no. We all have obligations that are just part of school, work, or life, things we don’t have the option of turning away. But just about everything else is a choice. Do you need to attend that standing meeting every Tuesday? Do you need to meet with that tutor for the course you’re already earning a solid B in? Do you need to do yet another round of test prep in the hopes of eking out another 50 points?

Your answer to any or all of those scenarios might well be yes. But it’s important to ask the question, and to remember that the surest way to get more done is to have less to do.

Studies have shown teaching material is the best way to learn it, a process I’ve written about before. The act of clearly explaining something, even to an imaginary student, engages a different part of your brain than just absorbing the material. And here’s some more science, a meta-analysis of 64 studies involving 6,000 students, all showing that the ability to explain something (even to yourself) leads to better learning outcomes than when the explanation comes only from a teacher or book.

If you want to raise your grades this year, put some teaching into your studying.

Given that your average college-bound student probably works at least 40 hours per week between school, homework, and activities, you might check out this article and consider the referenced research that shows:

If your biggest achievement is simply how many hours you work, fewer hours spent working just might lead to bigger achievements.

And for teens (or parents!) who are convinced that you can get by with less than the recommended 7-8 hours of sleep, Matthew Walker’s Why We Sleep: Unlocking the Power of Sleep and Dreams is a worthwhile and potentially alarming read.

Let’s get some more downtime—and some more sleep—into all our lives.

“Will this be on the test?” and “Tell me what to do” work occasionally in high school. But that approach is working less often and less reliably every day in the real world.

As often as you can, approach the things that matter to you in high school not by looking for a right answer and waiting to be told what to do. Instead, try:

“Here’s what I think we should do.”

“Here’s why I think that’s right.”

“Here’s what I’m hoping will happen if it works.”

That’s the posture of the leader who seeks to solve problems without a right answer. And colleges can’t get enough of those people.

Students, parents, employees–even the most well-intentioned of us screw up occasionally. And when others are affected, those moments are a perfect opportunity to build your reputation rather than to break it.

Yesterday, Basecamp, the project management software used by hundreds of thousands of people, including me and my team at Collegewise, went down for five hours. Basecamp allows users to do everything around a project, from posting and editing files, to communicating with team members, to assigning and tracking to-do’s. Used as intended, you don’t have to rely on other services for file sharing, for group chat, or even for email. Basecamp does it all. That’s their sell. If you used the tool exactly as they encourage you to do, five hours is a long time to be without it, especially if you have a lot of people working on an important project. It also turned out that the malfunction was entirely avoidable.

And yet, by the time the problem was fixed, Basecamp’s reputation as a tool and a company appeared to be even stronger than it was before. How did they pull that off? I saw five components to their approach:

1. They alerted all of their users right away. They didn’t wait for people to reach out to their help lines just to learn that software was temporarily down.

2. They continued to update their users with information and estimates about when the problem would be fixed.

3. Each of these updates was detailed and shared seemingly all of the information available at the time of the posting.

4. They never said or wrote that truly awful phrase, “We apologize for any inconvenience.”

5. Their CTO, David Heinemeier Hansson, stepped up and took personal responsibility for the problem. Here are some excerpts from his post after the problem had been fixed:

“All in, we were stuck in read-only mode for almost five hours. That’s the most catastrophic failure we’ve had at Basecamp in maybe as much as a decade, and we could not be more sorry. We know that Basecamp customers depend on being able to get to their data and carry on the work, and today we failed you on that…We’ve let you down on an avoidable issue that we should have been on top of. We will work hard to regain your trust, and to get back to our normal, boring schedule of 99.998% uptime…It’s embarrassing to admit, but the root cause of this issue with running out of integers has been a known problem in our technical community…We should have known better. We should have done our due diligence when this improvement was made to the framework two years ago. I accept full responsibility for failing to heed that warning, and by extension for causing the multi-hour outage today. I’m really, really sorry.”

The steps are less important than the overarching approach. They cared. They communicated. They empathized. They brought a human to the forefront instead of hiding behind company layers. And most importantly, someone stood up, took responsibility, and sincerely apologized.

After Hansson posted his explanation and apology, the comments and social media feeds filled with users’ expressions of forgiveness, encouragement, and even praise for both Hansson and Basecamp. Here’s a screenshot: 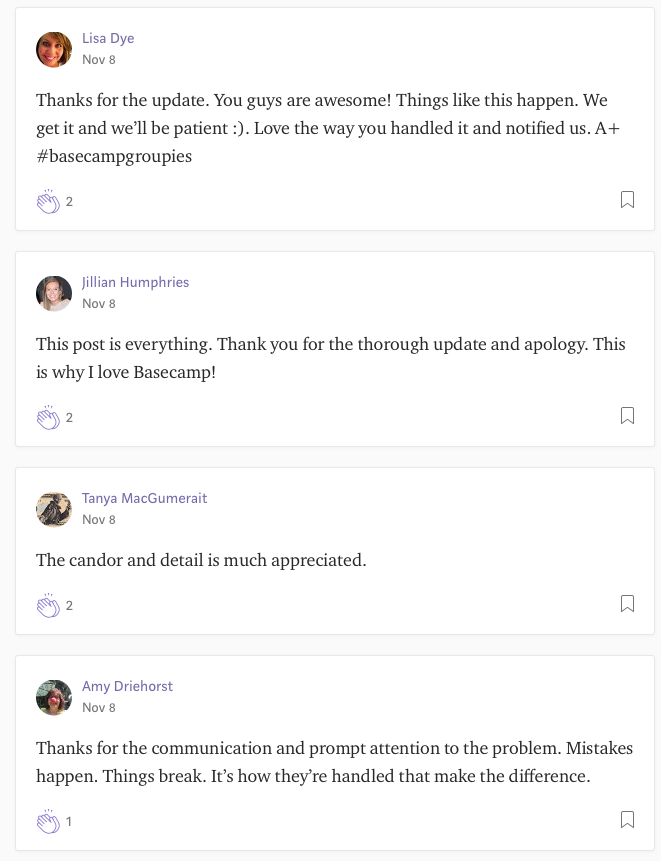 You’ll screw up (or do so again) one day. It happens to everyone, often in spite of the best efforts or intentions. When it happens, run towards—not away from—the responsibility. Apologize to people who were affected and acknowledge that you understand what the mistake meant for them. Resolve to do better and mean it.

Whether you’re just one person who let down a friend or a company who let down thousands of customers, forgiveness will almost certainly be forthcoming if you handle the mistake correctly.

Author Dan Pink offers this 2-minute video sharing some key points from Heidi Grant’s aptly named Reinforcements: How to Get People to Help You.

And for more on this topic, here’s a past post of mine.

We tend to make better decisions if we separate the decision from the outcome.

Imagine you’re walking to school. You’re confronted by an aggressive dog, so you move to the other side of the street. A car speeds past you and splashes muddy water all over your clothing.

Did you make a bad decision moving to the other side of the street? No. The decision and the outcome are two separate entities. You acted based on the best available information and options at the time. The fact that things later went awry doesn’t change the quality of the past decision.

This works the other way, too. Imagine you’d instead decided to approach the dog and provoke it, causing it to run away. A few more steps down the sidewalk, you find $100 you wouldn’t have found if you’d crossed the street.

Did you make a good decision? Actually, no. You made a terrible decision based on the information and options. You just got lucky that things turned out well.

This happens all the time in all areas of your life. My wedding rehearsal dinner took place at a wonderful restaurant that had no air conditioning during one of the hottest summer days in Seattle’s recorded history. Did we make a bad decision booking that place months earlier? No. It was a great decision based on what we knew at the time, which did not include an accurate weather forecast months in the future.

And while we’re at it, another student’s acceptance to your dream school does not necessarily mean they made a good decision with their choice of essay topic, or that you should follow suit. They might have been admitted in spite of that topic (only the admissions readers who were in the room know why that student was admitted). Don’t assume the decision created the outcome.

Decisions are like bets. Making a smart one increases the likelihood of a good outcome. But it almost never guarantees it.

So stack the deck in your favor. Do the work, be informed, and make your decision based on what’s in front of you at the time.

But if the outcome isn’t what you’d hoped for, don’t punish yourself or the decision. It might just mean that your smart bet met bad luck.

For more on this, poker champion and business consultant Annie Duke’s Thinking in Bets: Making Smarter Decisions When You Don’t Have All the Facts is an excellent read.