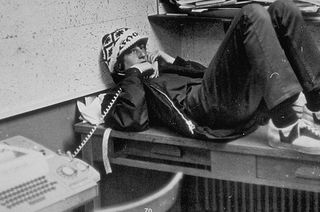 In high school, Bill Gates was a kid who was absolutely fascinated with computers.  He got himself excused from his math classes so that he could learn more about programming.  He would sneak out of the house at night to use a computer on the University of Washington's campus (the college kids were using it during the day).  His high school hired him to write computer code to schedule students into classes.  So Gates did–and made sure the software would automatically place him in classes with a higher ratio of females to males.  He wrote a program in high school that would count traffic, and sold it to the city for several thousand dollars.

According to the book Outliers, Gates estimated he spent about 10,000 hours learning and exploring computer programming during his youth.  He loved it, and was totally obsessed with it.

I didn't go to high school with the man, but I am certain that Bill Gates never once concerned himself with whether or not his passion for computers would get him into a "good" college.  He didn't ask if it would "look good" on his applications.  He didn't worry if he should be getting more leadership positions or joining more clubs or doing something else that highly-selective colleges were "looking for."  He just found something he loved, devoted himself to it, mastered it, and used his knowledge to impact his school and his city.

The results speak for themselves…

2. Today, he is the founder of Microsoft and has a net worth of approximately 56 billion dollars.

You can't fake passion.  And that's why colleges look for it.  They don't want someone who chose activities based on what he thought would be impressive.  They want the next Bill Gates (though they would likely prefer that you not drop out of college, which Gates did to found Microsoft in 1975).