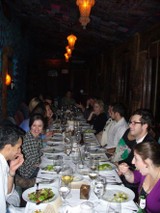 We don’t need much to have a good time at Collegewise.  Just good friends, good food, and of course, Snoop Dogg* (doesn’t everybody need a little more Snoop in their lives).

The Collegewise 2007 Holiday Party at The House of Blues on the Sunset Strip was a rousing success.   A total of 22 Collegewise employees and significant others attended which, as Kevin pointed out, may not seem like a lot of people if you work at Google who, at last count, had roughly 6,845 more employees and who-knows-how-many-more significant others than we have.  But Collegewise has experienced our own Google-like meteoric rise since the first holiday party which took place in 2001 with two employees in Kevin’s living room.  So our little holiday party was pretty exciting for us.

Jennifer, Margot, Kyle, Allison and Kevin from Irvine joined Arun and Jessica from LA, Alex and Breda from New York and Rick from New Jersey.  We also had three of our wonderful essay specialists, Amy, Drew and Mamie to complete the table, a table whose attendees helped over 350 kids apply to college this year.

Coincidentally, Snoop Dogg was playing the House of Blues on the very same night.  So the party planners (Kevin and Arun) admitted to some pre-party anxiety when, as the Snoop news was passed from co-worker to co-worker, it eventually morphed into an understanding that Snoop would be giving us a private concert at our dinner table.  While the private concert never materialized, the good friends and good food certainly did.

When Arun hired Jessica to join his Collegewise Los Angeles office last summer, one thing became clear almost immediately.  We needed someplace for her to sit.  In fact, we needed more space for all those kids who’ve been enrolling, too.  A few months ago, we found it; and last week, we officially celebrated it.

On January 17, Arun and Jessica celebrated the grand opening of the new-and-improved offices of Collegewise Los Angeles.  Joined by the Irvine office, some fellow counselors and admissions officers, and by our friends at The Princeton Review who have always been so great to us, everyone got the grand tour and to see where the counselors and the kids will be spending their time these days.

With public computers for kids to use, a "Words of Wisdom" bulletin board where Collegewise seniors share advice with underclassmen just starting the process, and personal touches like a Homer Simpson puzzle (we know Arun had something to do with that), we’re all so proud of the business Arun and Jessica are building together.